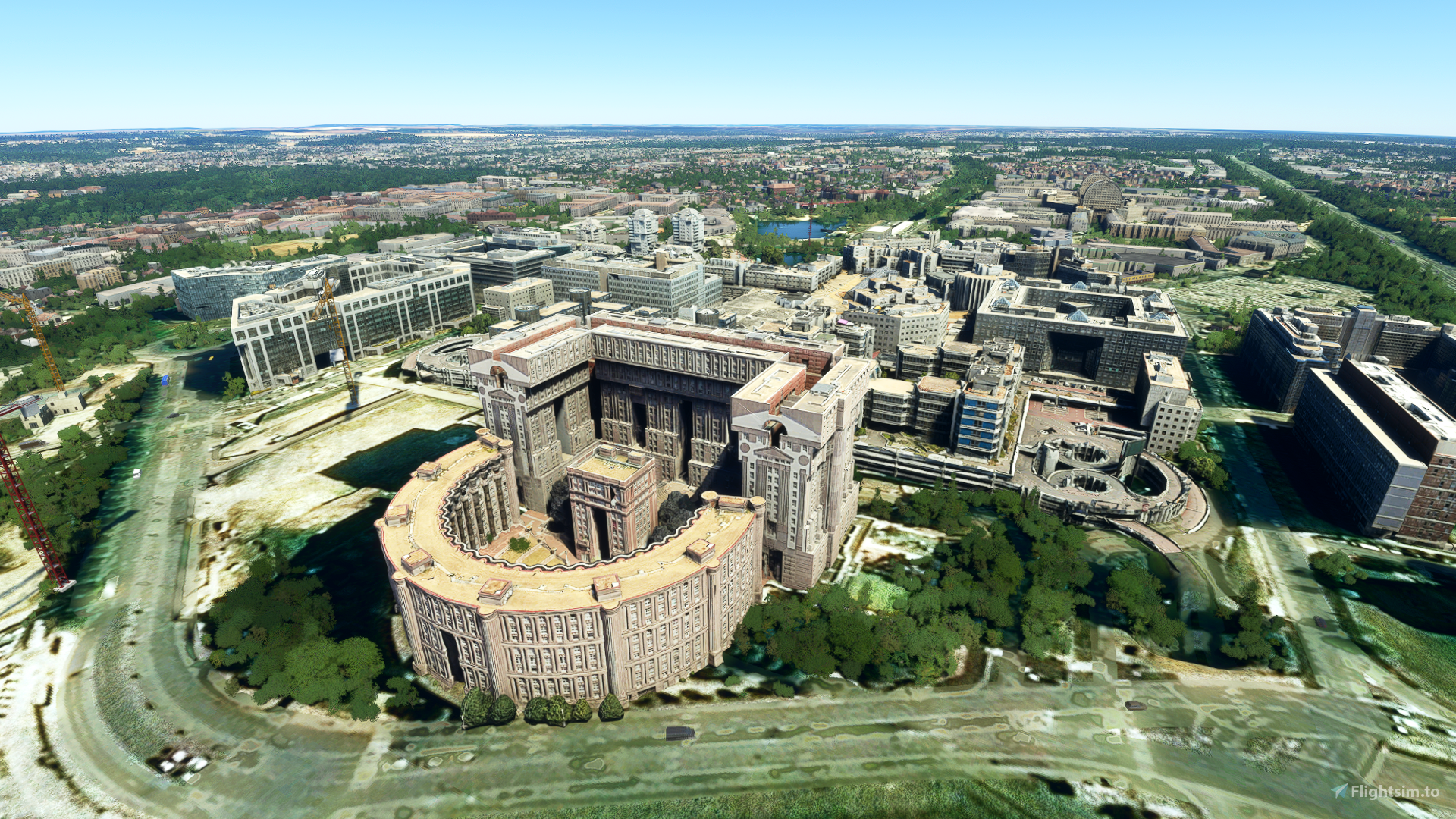 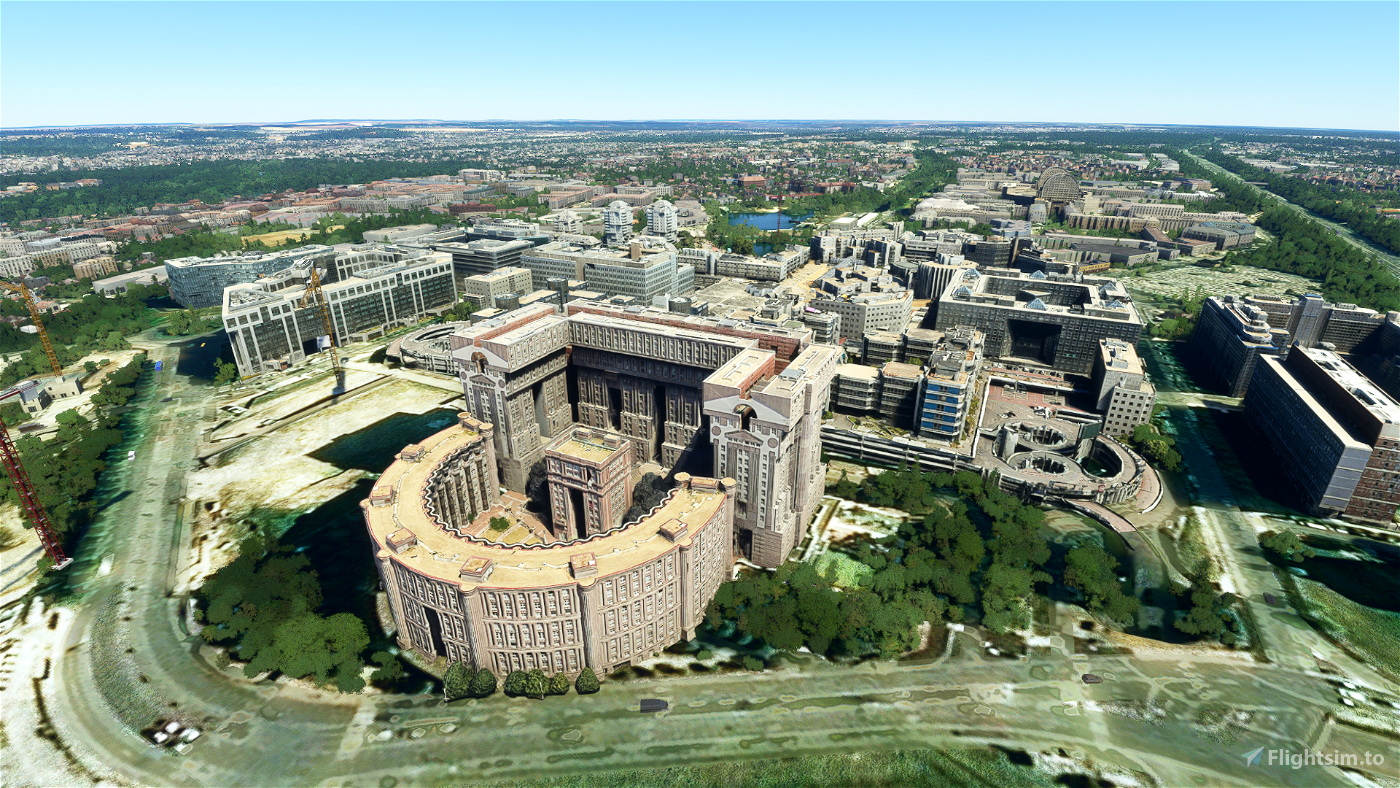 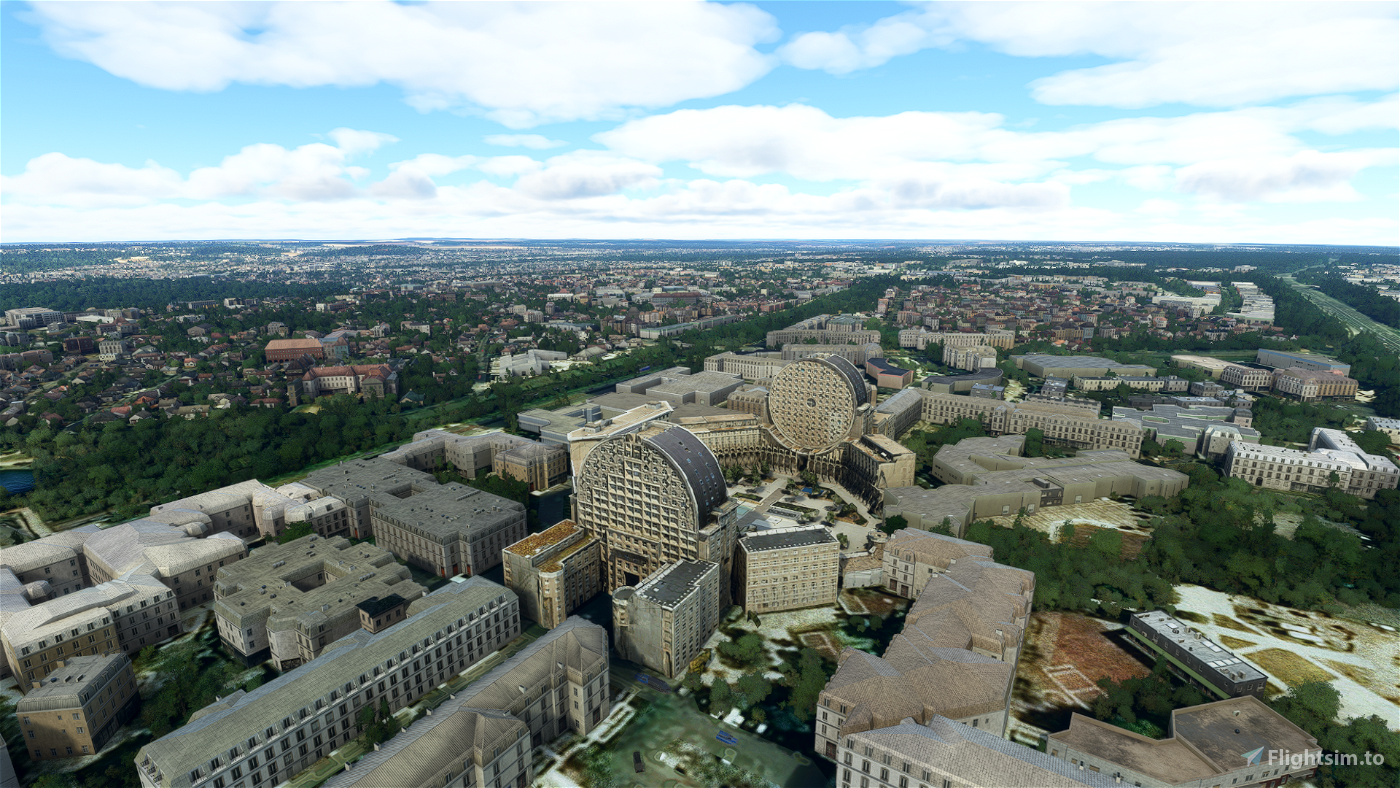 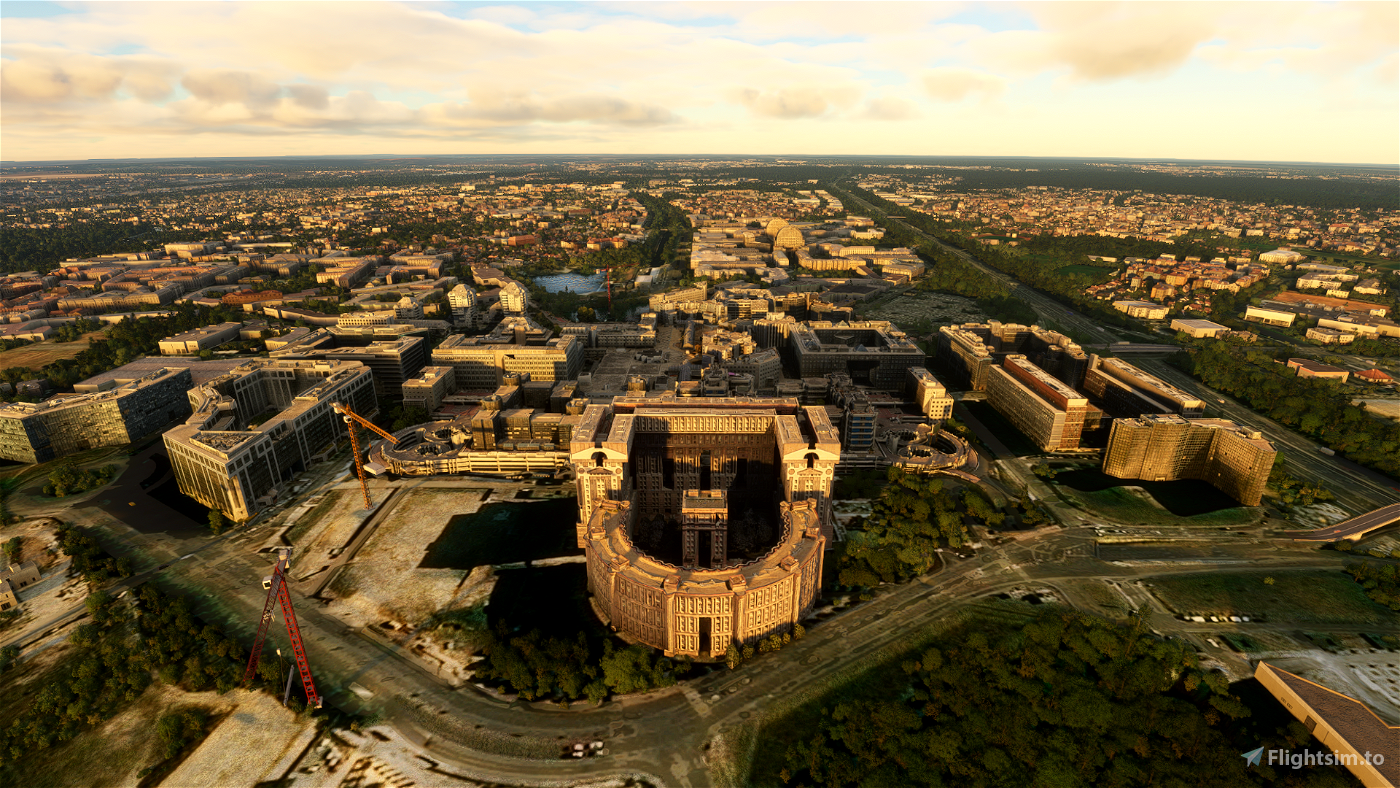 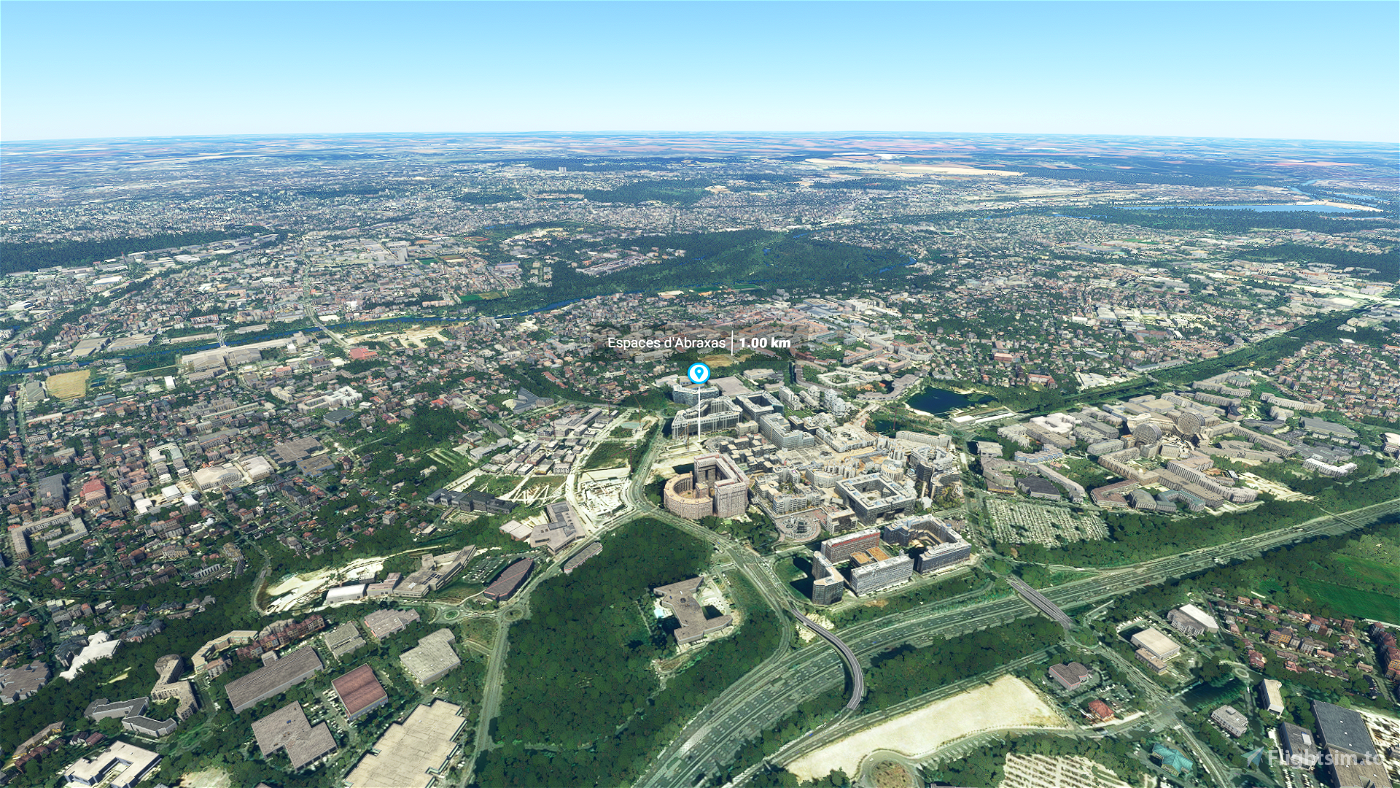 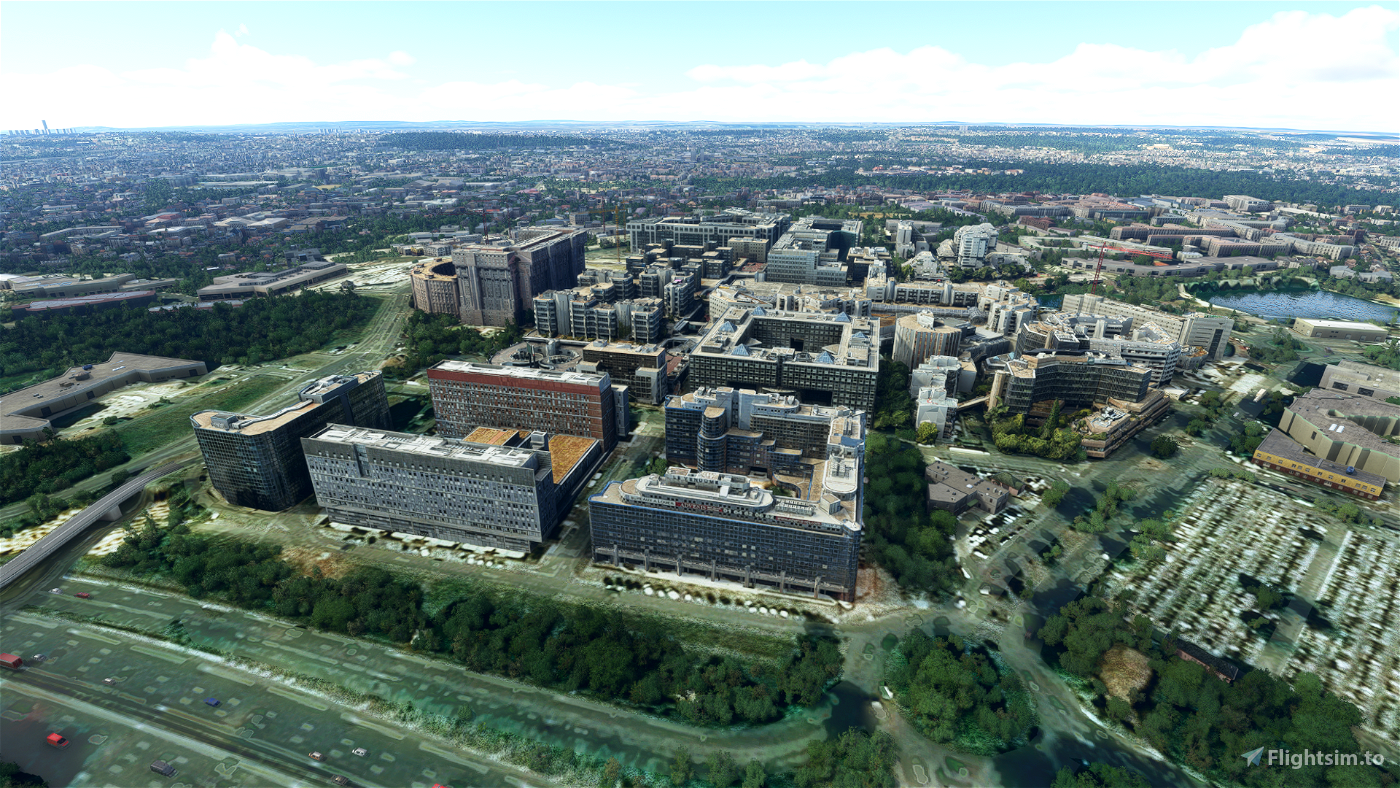 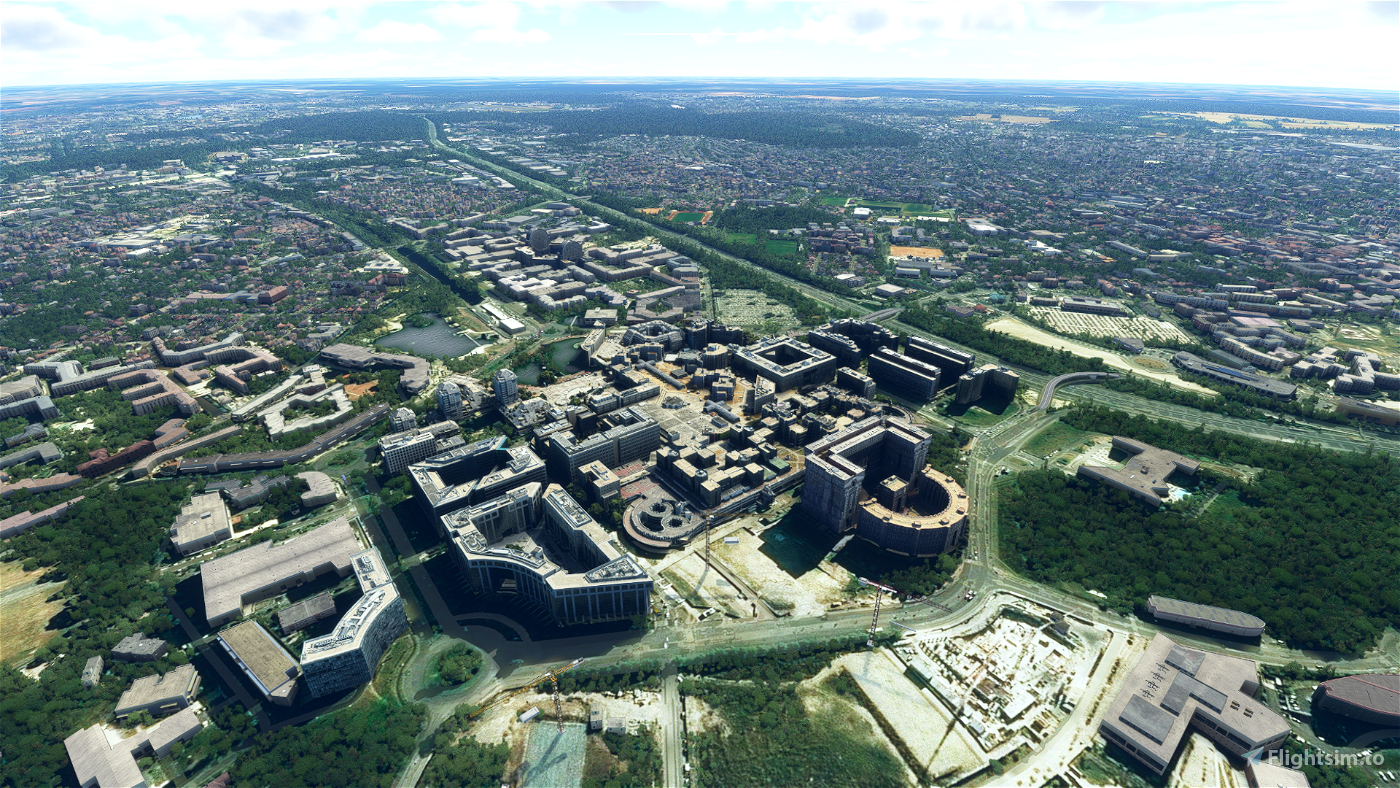 Noisy-le-Grand: Espaces d'Abraxas and other landmarks

Noisy-le-Grand is a commune in the eastern suburbs of Paris, France. It is located 15.2 km (9.4 mi) from the centre of Paris. The commune of Noisy-le-Grand is part of the sector of Porte de Paris, one of the four sectors of the "new town" of Marne-la-Vallée.

Some of the postmodern architecture in the commune has been used as a shooting location in several movies.

Les Espaces d'Abraxas is a monumental complex of 591 apartments in Noisy-le-Grand. It was designed by Ricardo Bofill Taller de Arquitectura in 1978 and completed in 1982. It rapidly acquired iconic status, amplified by its use as background sets in movies and music clips. It consists of three buildings: Le Palacio (the palace) is the largest, followed by Le Théâtre (the theater) to its west, and the smaller L'Arc (the arch) between the other two. Le Palacio has 441 housing units, Le Théâtre has 130, and L'Arc has 20.

In the decades following its creation, living conditions in the complex have deteriorated to the extent that its demolition was debated in the mid-2010s. In 2018, the city of Noisy-le-Grand announced that Ricardo Bofill would oversee the renovation of Les Espaces d'Abraxas and of a number of nearby developments, including new construction.

The unusual and monumental appearance of the Espaces d'Abraxas has made it a favorite background set for unreal, often dystopian narratives. It features prominently in Brazil (1985) and in The Hunger Games: Mockingjay – Part 2 (2015). It also appears in À mort l'arbitre (1984),F.B.I. Frog Butthead Investigators (2012), and the French TV mini-series Trepalium (2016).

The building comes with its own POI.

This pack also contains additional mods for the city of  Noisy-le-Grand
-Arènes de Picasso: A real estate complex designed by Spanish architect Manuel Núñez Yanowsky in 1981 and inaugurated in 1985. The ensemble is mainly made up of buildings surrounding a square. At both ends, two large cylinders, whose axis is parallel to the equator, are embedded in the dwellings. The two defining elements of the ensemble are two cylindrical-shaped buildings (nicknamed “camemberts” by locals), placed above the west and east sides of the square.
-Centre commercial Arcades: The Arcades commercial centre, just one block away from the Espaces d'Abraxas, is represented by a huge flat-roofed building in the vanilla game. This mod makes it closer to reality.
-Parking double-helicoïde: this sci-fi looking double-helix parking is located between the Espaces d'Abraxas and the Arcades commercial centre. It was designed in the mid-70s by Ludovic Maillard.
-Le Vendôme: this mod covers 3 modern administrative and office building located just south of the Espaces d'Abraxas inclubding Le Vendôme.
-Porte de Neuilly : this mod covers modern adminstrative and commercial buildings in the immediate northern vicinity of the Espaces d'Abraxas around the square Prte de Neuilly

This pack does NOT contain a full photogrammetry extract of the city in order to keep acceptable size and performances for lower configurations.

These add-ons may be required or recommended to use.

Parts of this content includes 3D data and textures copyrighted by « Google Map data ». Google Maps and Map data are provided by © Google, LLC, Mountain View, California, US. This free creation contains content from Google Maps or Google Earth, in accordance with Google Terms of Services and especially point 2.2 of Google Maps/Google Earth Additional Terms of Service. This creation is based on « fair use » or « fair dealing » of the data provided by Google through its services. No commercial use or any gain will be made by the author of this creation or the original host site, who use Google assets as provided for by the simple user licence. The author is freely sharing a creative application of Google Maps or Google Earth. The author will not receive any form of remuneration for sharing this work. Spontaneous general donations from users of file hosting web services under the form of « rewards » or « tips » will be rejected. If this content is found elsewhere and is offered in exchange of money or any other kind of remuneration, it is without the permission of the author and if such theft of intellectual property occurs, this site, and the author will disavow such distribution. Google has stated that it cannot answer to any direct demand about a particular creative use of its properties, as it stated in the « written permission » paragraph of the same document, and all such demands should in the first instance be directed to the author of this work. The author’s verification of compliance with Google’s Terms of Services will rest on this statement of intent, and the use of the provision of the « Fair use » paragraph of the document. As it is economically unreasonable for the casual creator of this content to ask for a costly legal analysis of its creation like proposed in the « Fair use » paragraph of the document, the author of this creation and the owners of this site undertake to destroy any trace of the work on first demand from Google, in accordance with the paragraph « Taking action in case of problems » of the Google Terms of Service about « advance notice » provided « when reasonably possible ».

Great Work, I made a small cinematic video based on your mod, check it here: https://www.youtube.com/watch?v=K_Yzvmz2iKo

Very cool, I added it as video preview as usual ^^

Thank you very much !

Why is this file hosted external?
There may be several reasons. Mostly, we have not yet been able to contact the owner of this file and ask him or her for permission to host the file on your own servers. Maybe the legitimate author does not like his file to be hosted elsewhere. Legally, we are only permitted to host files uploaded by the author himself or with explicit permission to do so.

The link is broken or not working?
Unfortunately, files which are not hosted on our servers are beyond our control. Please use the "Report" button on the bottom right of this page to report dead links and we will try to fix it. Thanks for your understanding!

Please note that we can only process copyright infringement notifications if they come from the rightful copyright holder or his legal representative. Law prohibits us from processing third-party requests if you are not the owner or copyright holder of this file.

We need additional details about the allegedly infringing content. The more details and the more accurate, the faster we will be able to process your report. We kindly ask you to understand that we cannot process copyright requests through this form, as we are required to receive such correspondence in the form of a formal complaint via email, signed by your first and last name.

Please note that it is not enough to say that a file has been stolen. We need precise and accurate proof of the infringement.

Your E-Mail must contain this information:

Please send your letter with all required information above to this address:
[email protected]

This file is hosted external. If you are the owner of this file, you may request the migration of this file to your account, where you can easily upload, manage and update it. No longer needed ugly, complicated links. The migration process can take up to 24 hours.